Musings about birth, nutrition, herbs, family, travels and whatever else inspires, sparkles, and vibes my way. Welcome! 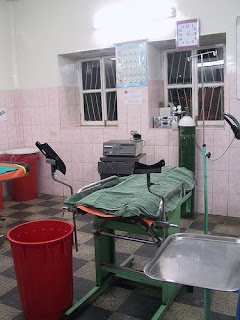 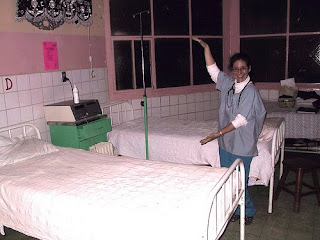 posing in the sala de dilatacion 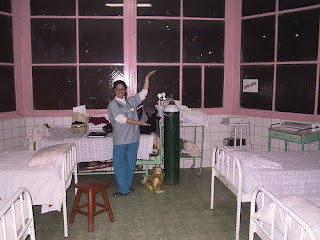 Sat in birth circle this afternoon, where we share our clinical experiences and ground them in different paradigms. Lots of tears and self-righteous indignation and outrage at what we are seeing and feeling. Whapio popped in at the end and dropped a little mind-blowing tidbit: "Your work here will be done when you feel so much gratitude that you don't want to leave the hospital. You will have learned humility, to truly serve, and that is midwifery.¨

based on my experiences and the stories of my sisters, I am starting to grasp an overall picture of hospital birth here:

-women are screened in the emergency room for admittance. they are assessed for vital signs, cervical dilation & effacement, integrity of membranes, and fetal heart tones. if between 4-5 cm dilation and there is room at the hospital, they are admitted.

-women labor in the Sala de Dilatacion--dilation room. husbands, sisters, parents or other significant others must stay in the hall behind 2 sets of double doors. Nobody updates them with any information. Patients are given a gown and assigned a bed. A few remain in their own clothing or some combination of hospital gown and their own vestments. Most women get right in bed and lie flat on their backs, alone, in a bright and often noisy room. In the hospital where I work, up to 4 women are in labor at once.

-amazingly to my North American mind, Fetal Heart Rate is seldom assessed. FHR is not routinely checked after Rupture of Membranes, whether Spontaneous (SROM) or Artificial (AROM). AROM is performed often, using a sterilized half of a hemostatic forceps.

-the women may drink, but it is not offered or encouraged. they also may get up to pee when they want to, but again this is not assessed or encouraged in any way.

-the room between the dilation room and the bathroom is a storage area containing a mop, a sink, and piles of stainless steel bedpans, stacked-up buckets containing placentas, and large orange trash cans full of blood and used gauze from prior births.

-a saline IV is routinely placed at approximately 8 cm dilation. It remains throughout birth and into the first hours postpartum.

-many chatty interns are present in the Dilation room but they do not provide any labor support. They occasionally assess vitals, insert an IV, check dilation, etc. but barely speak to the women for whom they are providing care. They will absentmindedly tap on a patient´s bed, place their clipboards on her legs, giggle about their boyfriends, dance to the radio, or noisily bounce the new birth ball gifted from our program. An aura of respect is sorely lacking.

-They don't like the women to get noisy when labor is intense, so there is lots of encouragement to be quiet and breathe. ¨Tranquile, Respire¨. If the woman cannot obey, they are given a medication similar to Demerol, without consent.

-Pitocin augmentation is common and again, given without consent. I have seen it administered several times at complete dilation, when labor often takes a natural pause as the womb-an gathers her energy for the next phase. I have witnessed it given 3 times within 2 hours to the same woman: via IV in the dilatation room, IV in the delivery room, and IM in the delivery room post-birth (she was not hemorrhaging).

-when it is time to push out the baby, the woman must walk to the Sala de Parto (Delivery Room), climb up onto a table, lie flat on her back or on a slight incline, and place her calves up into stirrups.

-every first-time mother, or woman having her first vaginal birth, receives a generous episiotomy. they fervently believe this helps prevent the perineal muscles from tearing. from every observation, it does exactly the opposite. sometimes the episiotomy is cut prior to full head crowning, rendering the woman's perineum a gushing mess.

-baby heads are grasped from the yoni and delivered, then roughly restituted prior to true physiologic restitution.

-baby is very briefly allowed to rest on mom's abdomen as its cord is immediately clamped and cut. then baby is whisked across the hall to be assessed, not to reunite with its mother for at least an hour.

-third stage: mom receives a shot of pitocin in her hip. her uterus is vigorously kneaded and massaged (yes, before the placenta is out). The cord is milked upwards and the hemostat re-clamped close to her introitus. Traction upwards and downwards is performed, ignoring the curve of carus, and often ignoring the need to guard the uterus above the pubis.

-after the placenta is delivered, the perineum is assessed and sutured, often painfully slowly.

-the woman is wheeled to a recovery room right next to the Sala de Parto. After an arbitrary length of time, someone brings her a baby wrapped in 3 or 4 layers of fabric. Babies generally remain with their mothers from this time forward. Eventually the mamatoto are wheeled to the Maternidad ward where they stay until they are stable. Average stay post-uncomplicated birth is 24 hours.

-cesarean sections are given for suspected oligohydramnios, placenta previa, and the common ¨big baby¨ diagnosis. For a cesarean, all women begin in Dilatacion where they change into a gown, hat, and long cloth boots. Next they must climb onto a gurney and receive an IV. They are wheeled down the hall, out 3 sets of double doors into the cold night, across a bumpy sidewalk, and through a courtyard to the building which houses the OR.


I have tried to keep many personal opinions out of this so you may formulate your own. It is quite easy to stand in judgment when the doctors, obstetras, interns, and technicas really do have positive intentions and are often doing what they can with very limited resources. Still, I cannot keep totally silent when I know in my heart and soul that birth can be so much more than a medicalized event!